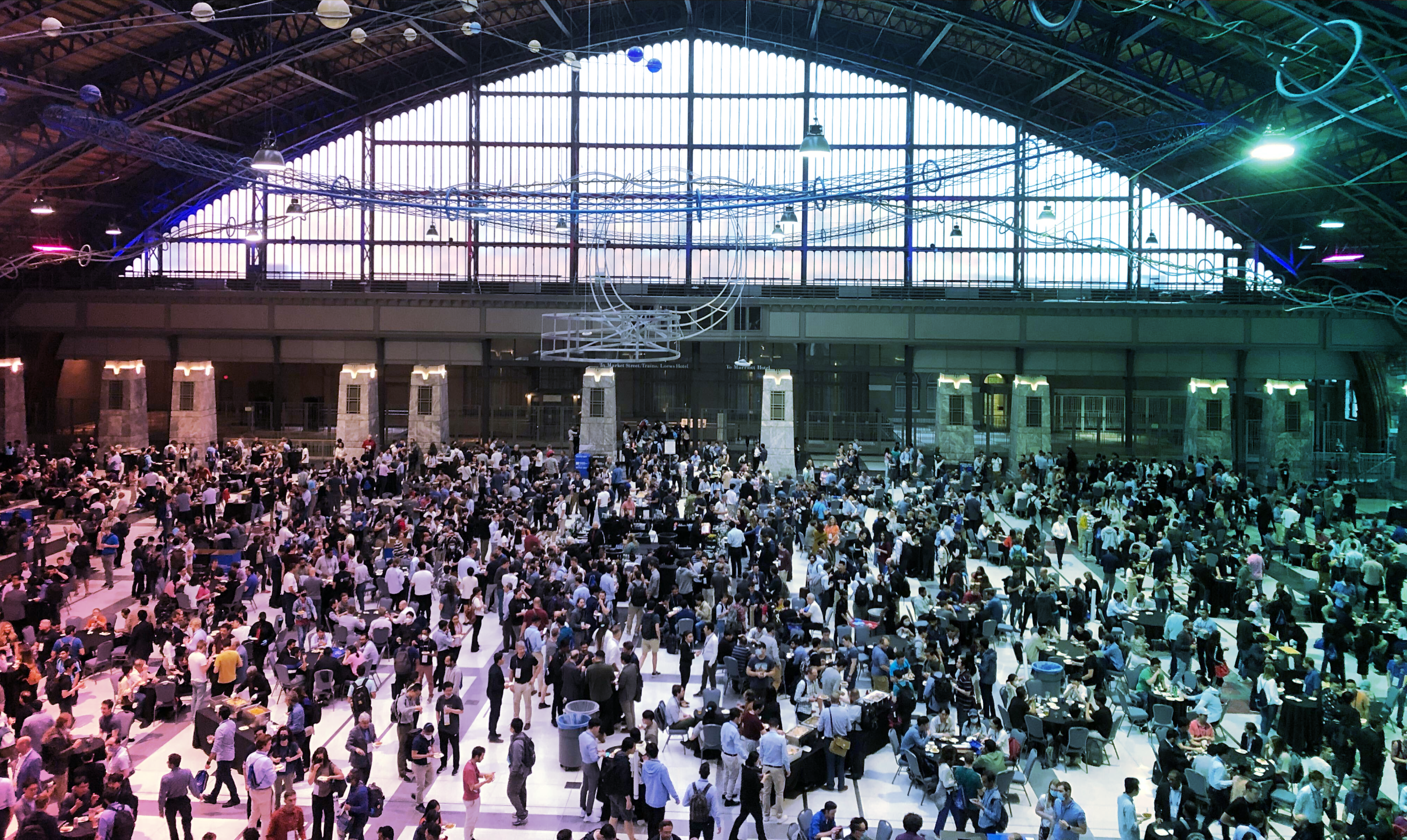 Hosted in Philadelphia this year, ICRA 2022 welcomed a large crowd- of both humans and robots- and offered an amazing peek into what some of the top robotics companies and researchers are working on.

Whether you couldn’t make it in person or were too busy trying out the robots (we don’t blame you), here’s a recap of the top 6 lessons our team learned from ICRA 2022’s speakers and forums.

1. Roboticists have the responsibility to consider the ethics of their work

Ayanna Howard, a roboticist, entrepreneur, and Dean of The Ohio State University College of Engineering started ICRA 2022 off to a strong start by discussing the importance of ethics surrounding robot gender and the manipulation of humans interacting with robots. She reviewed her extensive research that focused on collaborative robots and their impact on the behavior of children with special needs. This led her team to the conclusion that robots can enhance and influence developmental behavior, but also opens a wider conversation: are there times when it is unethical for robots to manipulate human behavior?

With the adoption of AI and robots increasing, there will be implications for healthcare, biases, and data privacy. Whether it’s programming a robot to lie to a patient about bad news for the benefit of their comfort, or even choosing to gender a robot (which can influence a human’s trust in the machine), roboticists must constantly consider the impact robotic features and actions will have on the humans who use them.

2. The barriers to working with robots are coming down

Some of the top robotics executives came together for a forum on Tuesday to discuss the state of the industry: Greg Smith of Teradyne, Dev Singh of Qualcomm, Claude Dinsmoor of FANUC, Danielle Dean of iRobot, Rich Mahoney of Intuitive Surgical, Anthony Jules of Robust.AI, and Marc Raibert of Boston Dynamics.

The message was clear that the robotics world is evolving to become more sophisticated, with education in the field of robotics becoming stronger as well, but there are still many questions of its current success and future. When it comes to how to measure the impact of robotics, Anthony Jules believes it starts with people’s lives changing, and looking at where/how robots are truly interacting with humans can help us begin to fully understand it. This shifted the conversation to the topic of the trajectory of current robotics education and how working with robots has become less of an obstacle.

Currently, the world needs more people to work than are available, and automation can help to fix this- but we need to build a strong pipeline to feed the need for humans to work alongside these machines. The panel agreed that what used to be a difficult industry that is heavy in tech is now gaining cultural literacy- years ago, one needed to be an engineer to work with robots, yet now that barrier has been removed as robotics is becoming more accessible. The responsibility is on us to put more of an emphasis on robotics education to shape that future.

3. We decide the outcomes of the next robotics era

Julie Shah kicked off Wednesday by discussing a strong theme of ICRA 2022: the future of work. She addressed the common fear that many people share recently of robots taking jobs from humans.  Although the threat may seem imminent, research suggests the issue is not robots taking jobs; it’s that they are not doing the jobs we need them to do due to a history of difficult relationships between humans and robots.

Julie went on to describe the 3 eras of robotics:

Julie spent most of her career in era 2, which allowed her to identify the most important focuses that need to be considered as we shape the third era- skills and training, flexiblity, and economic opportunity.

With these areas of focus prioritized for both humans and robots, technological change will replace existing work yet also create new jobs on top of them.

Session Title: Human-Machine Partnerships and Work of the Future

4. Autonomous robots are lowering the risk of Mars exploration

Vandi Verma, space roboticist and engineer at NASA's Jet Propulsion Laboratory, gave a crowded room a sneak-peek into robotic activity on Mars and what’s to come for future missions.

Conditions change rapidly on Mars, therefore it’s vital that autonomous capabilities are re-configurable, otherwise the robot cannot achieve much during its time on the surface. Vandi also expressed other challenges such as temperature changes that cause the robot to wait until later in the day to operate when it’s warmer to save power, and latency communication.

Looking ahead, she outlined the plan for future missions including MAS sample return, Moon To Mars: building commercial payload services, and exploring Saturn’s moon Titan, among others.

Session Title: NASA Robots on Mars and the Future Missions They Inspire

5. The workforce needs more support to prepare for automation- but it’s not as threatening as thought

Echoing Julie Shah’s presentation on human-robot relationships, the ICRA 2022 Future of Work Forum discussed the impact robotics will have on the workforce, with a panel of experts consisting of Jeff Burnstein of A3, Moshi Vardi of Stanford University, Michael Lotitto, Francesco Ferro of Pal Robotics, Cecilia Laschi of National University of Singapore, and Ioana Marinescu of University of Pennsylvania. Although each expert had their own opinion on the future, the message was clear: robotics is not threatening jobs at large, but the workforce is in dire need of help to prepare for increasing automation, and programs to help those displaced learn new skills.

Much of the commentary focused on how engineers and roboticists need to understand the needs of the workforce to ensure collaboration between humans and the robots they’re building. Although one expert, Michael Lititto, was concerned about the workforce facing a crisis as a result of automation, the vast majority of the panel agreed that robotics is not advancing mass job loss among the workforce. Instead, we must work to develop a sustainable solution to create better infrastructure and improve work environments rather than quick solutions that will die out, as Francesco Ferro explained.

Keeping with the similar theme of many other ICRA 2022 speakers, Ioana Marinescu stated, “the future is what we make it”.

Farms are facing tough times: labor shortages, chemical resistance, pests, climate change, and more. And it doesn’t stop just on the farms: consumers are increasingly particular about their produce, meaning farmers feel even more pressure regarding handling every process with care. However, Salah Sukkarieh, Professor of Robotics and Intelligent Systems Australian Centre for Field Robotics, has hope that robots can alleviate these issues.

Although his team has already covered a lot of ground in terms of testing various types of robots on farms, he began by explaining how his team started with UAVs on farms to help with mapping, path planning, and pest detection, among other tasks. They’ve also applied robots to the tree crop industry with automating data analytics, and then moved to focus on tackling one of the most costly tasks in the agricultural industry: harvesting. By using soft grippers on robotic arms, they could pick fruit while minimizing damage to the fruit. Other applications of robots within farms addressed major issues such as precisely spraying pesticides to avoid unnecessary greenery being sprayed, autonomous weeding and crop monitoring, and perhaps the most surprising application, monitoring herd patterns of cows.

In 2022, the robotics industry’s been busy with a strong comeback to in-person events, showing off the major advancements companies have been working on. Although we’re already halfway through the year, there’s still time to attend conferences to learn where robotics is headed and meet with key players in the industry. Check out the top […]

The Evolution of Mobile Robots And What It Means For RaaS
Alex Sixt
|
June 24, 2022
|
Community

When you think of mobile robots, chances are you picture a wheeled vehicle in a warehouse, shuffling among workers to transport materials from point A to point B. And with good reason. Autonomous mobile robots (AMRs) have taken off recently, particularly in warehouses and logistics, where these intelligent machines are working side by side with […]

Want to stay updated on the latest happenings in robotics but don’t have time to comb through the news or dig into a book?  Podcasts are an excellent way to keep up on hot topics whether it's during your morning workout on traveling for work. We’ve curated a list of the best robotics podcasts to […]