Creating A Robotics Simulation Pipeline With GitHub Actions And ROS 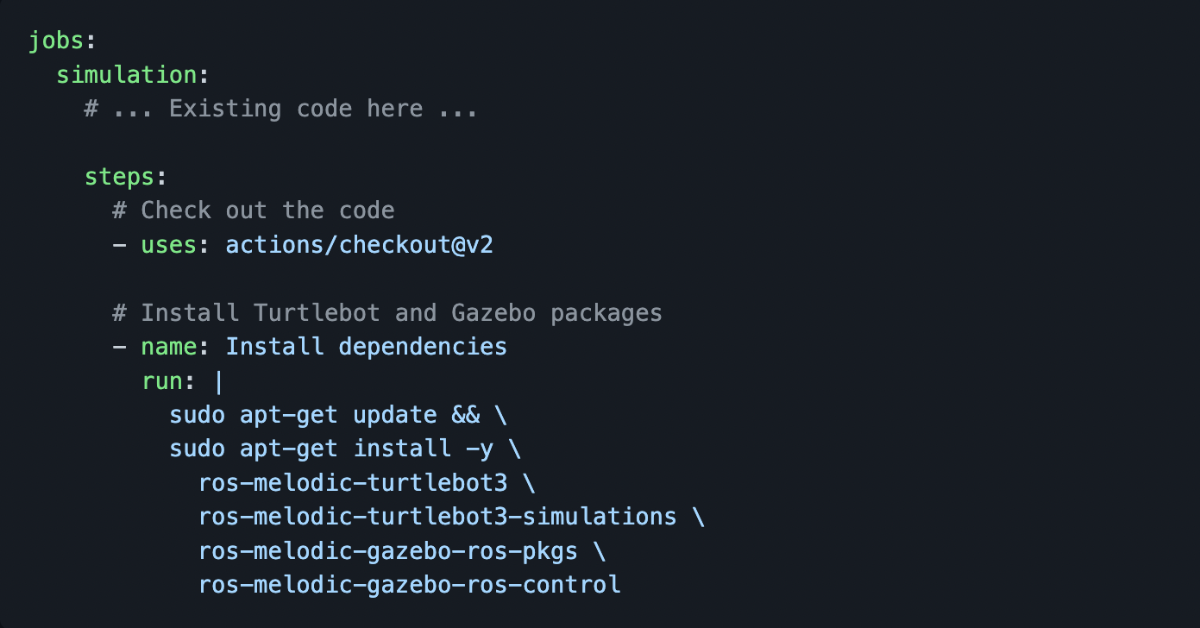 This post is contributed by Simon Bracegirdle, a Senior Consultant with Mechanical Rock.

At Mechanical Rock, we are strong believers in the benefits of continuous integration (CI) and continuous deployment (CD) pipelines. CI in particular is useful for running all kinds of validation and checks on your code before and after merging. For example, you can run; unit tests, static type checkers, linters and code builds. For robotics teams, one useful validation step is simulation.

This allows fast and extensive testing of robot software before pushing it out to your live robots. This reduces the risk and shortens the feedback loop of each deployment you make.

Of all the CI/CD tools available today, GitHub Actions is emerging as a popular and easy to use option for building your pipeline. But, up to this point, there hasn't been a lot of discussion of how to use it in a robotics context.

In this tutorial we'll run a robotics simulation using ROS and Gazebo in a Github Actions pipeline, using the Turtlebot simulation packages. We'll start by creating a simplistic robotic movement script and a ROS test script. Then we'll configure the GitHub Actions pipeline and then run it.

The benefits of GitHub Actions

One of the key benefits of GitHub Actions over alternatives is that it's directly integrated into the GitHub product, which is one of the worlds most popular source code repositories. This means you get build feedback directly in your pull requests, and in your email. For example; if you make a change that causes unit tests to fail, it will prevent you from merging that code in the pull request, and you'll get an email about it.

In this tutorial we'll introduce the basics of GitHub Actions and how to run ROS simulations in it with Gazebo.

What you will need

To setup a simulation in GitHub Actions, you will need:

This tutorial will assume some ROS and Python experience. It's expected that you've used them before and know some of the basic concepts.

Let's create a directory to house the project and ROS workspace:

To follow this tutorial you will need access to a ROS environment. There's two ways that you can do that:

If you're running Ubuntu or Debian you can install ROS Melodic by following the installation instructions on the ROS website.

Option 2) You can run ROS in Docker

If you don't have a supported system, or you would prefer not to install ROS on your base OS, you can containerize ROS instead.

After you have Docker Desktop installed, follow the steps below to run the ROS melodic container:

If all goes well, you should get a bash shell inside the container:

Having acquired ROS, the next step is to install the Gazebo and Turtlebot packages:

Setting up the ROS project

Now that we have ROS and our dependencies setup, the next step is to create our ROS project and run it locally. This will allow us to iterate on any changes before pushing it to GitHub.

It's time to create the navigation code for our robot! Since this is for demonstration purposes, we'll be naive and command our robot to drive in a straight line.

To start, create the file catkin_ws/src/my_turtlebot_sim/mover.py. Then, paste in the following code, which sends a linear velocity command on each 10Hz tick to the robot:

Why test in simulation?

If we're working with a serious robotic code base, it's valuable to have tests check the correctness of code before or after merging. This can drastically reduce the time to find issues and prevent leakage into live systems.

This is important when supporting maintenance and improvements over the life of the product. Having a strong test suite gives you the confidence to make changes, even large re-factorings, without negative side effects.

Unit testing is one approach than can help, but since it verifies functions and components in isolation, it wouldn't verify the effect of the code and robotic system working together.

That's where simulation comes in. It enables in-software integration testing of robotics systems.

Stubbing out the test

Let's show how that process works by writing a test that will run in our simulation environment.

To start, paste that boilerplate to a new file at catkin_ws/src/my_turtlebot_sim/test_bot_moves.py.

Once we add a launch configuration in a later step, the test_movement test will run when we start rostest with this script.

We want to check that the robot has moved a fixed distance from the spawn point. We'll set a timeout so the test doesn't run forever in case of an issue.

To check if the robot's moving, we'll write three methods in the TestBotMoves class. For the first method, let's save the position of the robot when it moves, using the model position data from Gazebo:

For the second method, let's run some pythogaras to get the distance from the spawn point to the robot's current position:

The third method will be the test method itself, which starts the node, subscribes to the Gazebo model state topic, and then continuously checks if the robot has travelled the expected distance:

To run tests in ROS, we need to create a .test file, which is a superset of a .launch file. This file describes the nodes and tests that we want to run.

You will also need to add these lines to the bottom of your catkin_ws/src/my_turtlebot_sim/CMakeLists.txt file:

You can see my full CMakeLists.txt file here.

We're now ready to test our sim locally! To launch it, run the following command:

This will launch the mover.py node, the Turtlebot sim and our test script.

If everything went well, the test will pass and you should see the output below:

If you have any issues with your project, please compare your project to the reference project in GitHub.

We can use GitHub Actions by defining workflows in yaml files. A workflow is a process that triggers under certain conditions, which we define in the on block. When we trigger these conditions, for example by pushing code to a branch, or opening a pull requests, then it executes commands that we define in the jobs block.

The jobs block defines the stages of our workflow. Each job can be dependent on other jobs. For example, you may want to run a deploy job after running your build and test jobs.

In our case, to keep it simple, we will run a single simulation job. This job will contain a series of steps, each of which is a set of shell commands. For example; we will first check out the code, then install our ROS package dependencies, build our project and then run the simulation with rostest.

To further your GitHub Actions learning, I highly recommend the official documentation.

Let's create an empty file for our GitHub Actions workflow under the project root at .github/workflows/sim.yml. Use the following stub as a starting point:

Let's add our simulation job, which runs in the ROS container image. We'll also want to run in a bash shell and our catkin workspace directory by default:

The first steps will check out the code and install the Turtlebot and Gazebo simulations:

Then build the workspace and run the simulation:

You can see the full workflow file here.

We've finished our workflow definition, we're ready to commit and push our code to GitHub to see the action run (this step assumes you have setup a repository):

Open the Actions tab on your repository. For example; https://github.com/MechanicalRock/ros-github-actions-tutorial/actions. You should see a new workflow run for your commit. For example; "My first ROS simulation in GitHub Actions".

Click on your workflow run to see more details. Click on the simulation node to see the details of that job. 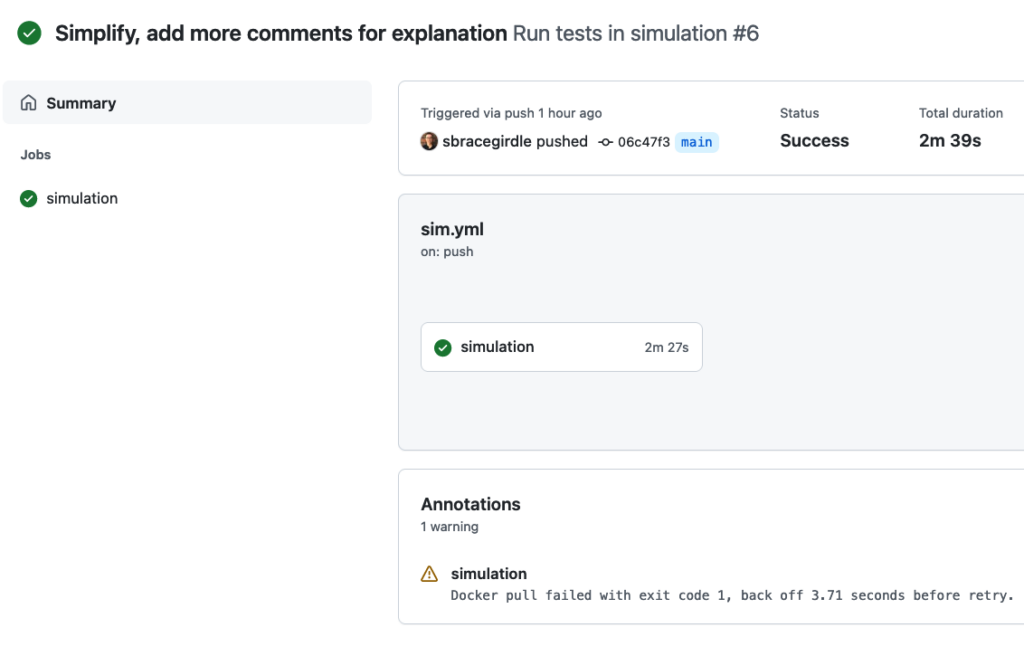 From this view you can dig into each of the steps of the job. If all went well then your simulation succeeded, and you'll be able to dig into the output of the "Run tests" step. 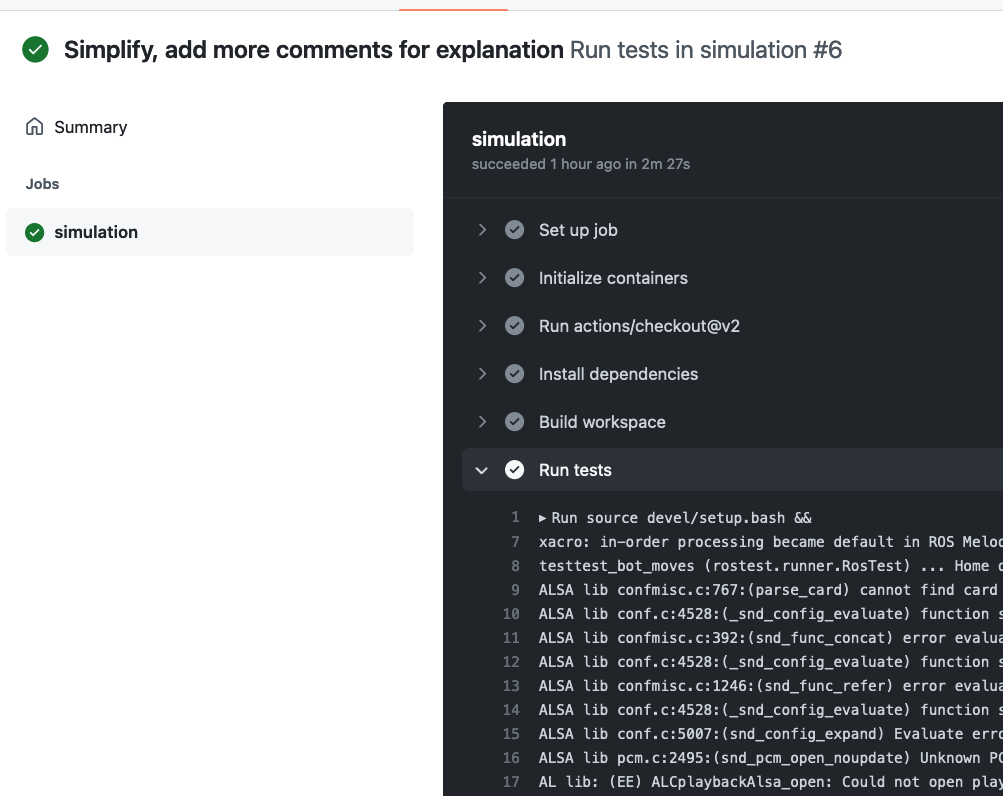 If you scroll down the logs, you'll see the following key bits of output indicating that our robot travelled the expected distance:

If you have any issues with your project, please compare your project to the reference project in GitHub.

We've run our ROS simulation in the GitHub pipeline and were able to verify the output of the test. This gives us confidence to merge our code without it causing nasty side effects such as broken builds.

In the real world, you may want to integrate a simulation pipeline step as part of a larger pipeline that includes building, linting, unit testing and deployment. But hopefully, this tutorial gave you a starting point to work with.

If you need help with your pipelines, please feel free to get in touch with us at Mechanical Rock.

Hi! I'm Simon Bracegirdle, a software developer and cloud architect from Perth, Western Australia. I work as a Senior Consultant at Mechanical Rock, where I help clients to build cloud native software and improve software practices.