Issue the commands you want from anywhere 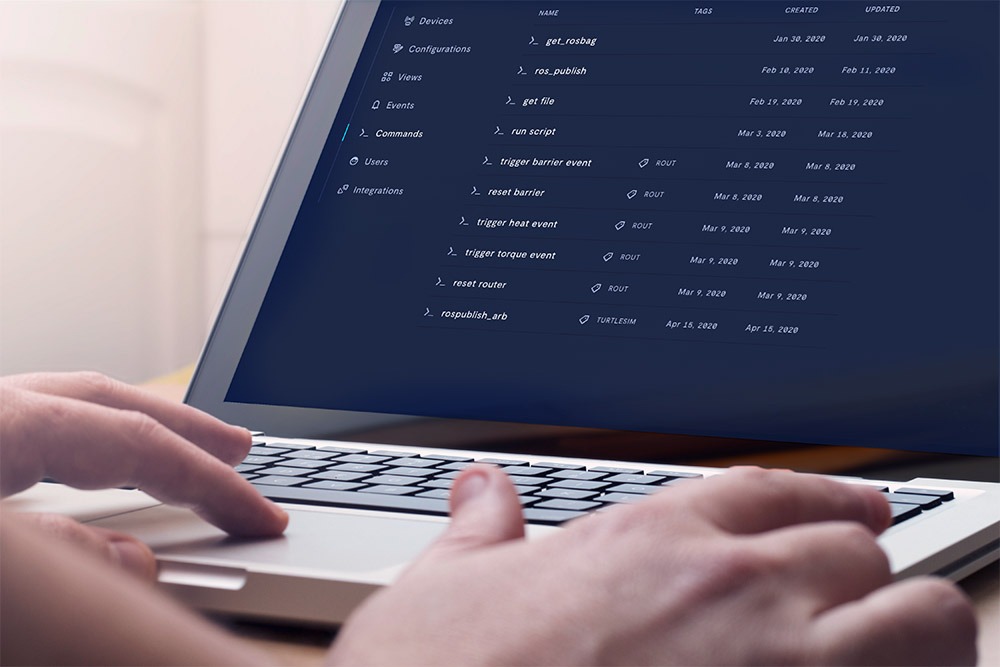 In the simplest terms, a command is a directive sent to a device to perform a specific task. With the Formant platform, one can issue any and all sorts of remote commands, in a durable manner. These robot commands can be broken down into the distinct categories: built-in commands and custom commands. Here’s how the two differ:

Both of these command types can be configured on the Commands page. For both types of commands, Formant allows you to assign each with a personalized name, description, and select the devices on which the command applies, making managing and accessing each command intuitive and efficient.

The life of a command

Not only does this assure operators that their commands will be received, it also saves them the trouble of having to actively monitor a machine’s connectivity status prior to issuing commands, or having to re-issue commands that go undelivered.

The rest of the Formant command life cycle is as follows:

The Formant platform allows for simple, straightforward command management directly from the Commands page of your dashboard. Under the Settings dropdown, the user can either select one of Formant’s built-in commands or define a custom command of their own. A simple, five-field management protocol allows for quick command construction designed to streamline your administrator’s work.

For built-in commands, one need only select a command, assign a parameter, and the identify the targeted device(s). The parameter should be enabled and set to the desired value. If the parameter value is not set, then it is collected from the user when they issue the command. For custom commands, the Formant API offers a fully integrated interface in which users can create the commands and develop the functionality that best serves their own unique application.

For example, one can fetch log files from a robot that malfunctioned the night prior in order to streamline and "remotify" the debugging process. Alternatively, one could create a command that pings a specific sensor in real time in order to monitor its status. In both cases, one would be issuing these commands manually, however, the Formant platform allows one to do much more than that.

Automate away the pesky processes

In addition to issuing customized robot commands manually, Formant also allows you to configure triggers, on discrete conditions, which cause the issuance of a command automatically. One can run a script which accesses sensor status, camera configuration, image masks, and other information whenever a device reaches a specified state.

With these tools, your organization can dramatically increase the efficiency and efficacy of its fleet, while simultaneously freeing up operators and administrators to address unforeseeable events and develop your operations.

After a command has been created, it can be issued to a device. This can be performed in the user’s Device Channel. First, one must specify to which device or set of devices they would like to issue the command, then simply click the command name and select "Run Command" to issue it. Once a user has issued a command, the status of the command can be monitored across 3 states, both remotely, and up-to-the-minute: Issued; Delivered; and Success/Failure.

With such an intuitive and versatile command system at their hands (along with the ability to automate said commands), your operators gain unparalleled efficiency and control over your organization's fleet. With remote commands, fire drills become one-click fixes, and mountains are reduced to molehills. Furthermore, each command can be assigned an access level, dictating whether operators, administrators, or even specific individuals can issue them.

As your organization grows, and encounters novel complications or needs, so too can its capabilities. What was once an "all hands on deck" problem can be met with a simple custom command when it rears its head in the future. And perhaps most importantly, one is able to do all of this without the exorbitant time, cost, and energy required of deploying a technician to the field.